On April 14, 2021, Amnesty International (AI) launched a campaign to release the Saudi activist Nassima Al-Sadah, who has been detained since 2018 and sentenced to five years in prison for her human rights activities.
AI called all those interested in human rights to take part in the campaign and stand in solidarity with Al-Sadah by sending letters to King Salman bin Abdul Aziz to demand her immediate release and that she gets all her rights.

AI wrote a sample letter and asked those interested to send it or rephrase it as they like.

The letter came as follows:

In March 2021, the Court of Appeals in Riyadh upheld the sentence of Saudi woman human rights defender Nassima al-Sada, signalling that the verdict is now final and leaving her without any further recourse to justice. The verdict had been issued by the Criminal Court in Riyadh on 25 November 2020 and consisted of a five-year prison term – partially suspended by two years – to be followed by a travel ban of five years. This verdict followed a trial that was marred by serious violations of her due process rights, including prolonged solitary confinement which could amount to torture.

Indeed, Nassima al-Sada’s ordeal started in July 2018, when she was arbitrarily arrested and then detained without charge or trial for almost a year. After a year, she was charged with unspecified crimes based on the cybercrime law, making it clear that she is being prosecuted simply for her peaceful human rights activities, namely advocating for civil and political rights and for the right of women to drive, before the driving ban was lifted in June 2018.

Nassima al-Sada is a brave Saudi woman who has dedicated her life to advocating for peaceful change and is being made to pay with the pain of family separation, isolation, and continuous violations of her rights, for her peaceful activities. She should never have been locked up in the first place – her place is with her family, her three children, her ailing husband, more than ever, during the Holy Month of Ramadan.

I urge you to ensure that Nassima al-Sada is immediately and unconditionally released, and her conviction and sentence are quashed, as she was detained and tried solely for peacefully advocating for equality for women. I also urge you to respect Nassima al-Sada’s right to movement by lifting the travel ban imposed on her for the coming five years.

Together for Justice also calls you to send letters and emails to the competent Saudi authorities and demand the immediate release of Nassima Al-Sadah and all prisoners of conscience, activisits, human rights defenders and politicians and guarantee them with a decent life, while protecting all their rights. 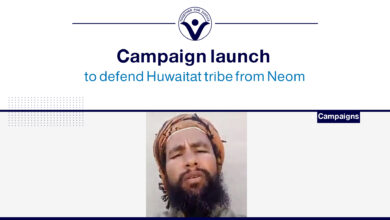 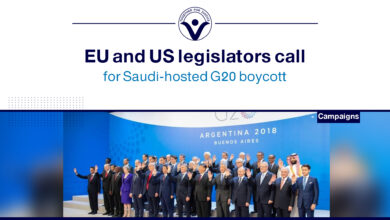